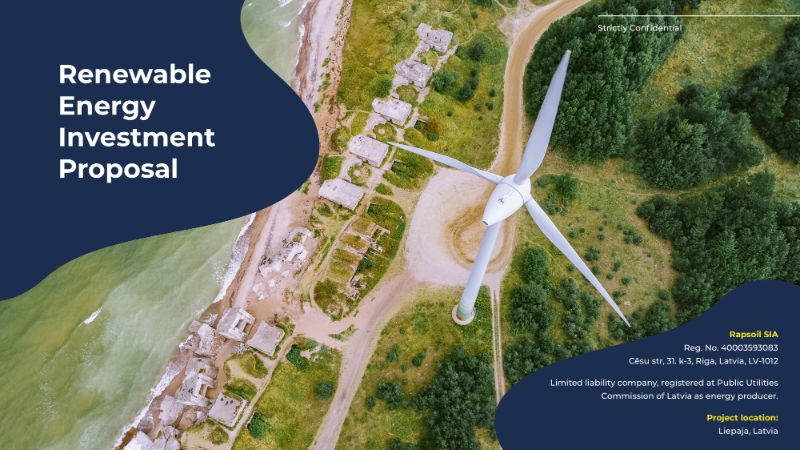 Rapsoil SIA (reg.no. K073437 02.04.2009), this segment is an SIA – SIA is the abbreviation of “sabiedrība ar ierobežotu atbildību” (exact translation is a limited company) Liability). SIA is very similar to UAB (in Lithuania), OÜ (in Estonia), GmbH (in Germany), SARL (in France, Luxembourg). The status and characteristics of the SIA are specified in several articles of the commercial law of the Republic of Latvia.

This company was founded in 2009 with the aim to build projects in the field of renewable energy over this period, the project in the former form has laid the necessary foundation to put into operation a highly efficient wind farm at this very moment the project was at that time acquired by the current shareholders of Enercom AG in order to pursue the foundation after the owner of the project Rapsoil was carried out, today’s shareholders decided in recent years to strengthen the foundation, which resulted in a project that now has all the necessary certificates to immediately realize the wind farm of 15 turbines, once the setup would be finalised – produced electricity would be sold to the largest customer of electricity in the Nordic. Nord Pool AS operates Nord Europe’s largest electricity market in terms of traded volume (TWh) and market share. The company operates in Norway, Denmark, Sweden, Finland, Estonia, Latvia, Lithuania, Germany and the United Kingdom and is a Nominated Electricity Market Operator (NEMO) in 15 European countries. It also serves the electricity markets in Croatia and Bulgaria. More than 80% of Nordic’s total electricity consumption is traded through Nord Pool. It was the world’s first multinational exchange for electricity trading. The produced energy produced by Rapsoil SIA would immediately be fed into the grid.

See the Factsheet and Presentation for further information.